As a life-long aviation enthusiast, former U.S. Air Force enlisted puke, and subscriber to Aviation Week and Air & Space, I have often read about flight testing, especially by Boeing, at the Grant County International airport in Moses Lake, WA.  During our travels westward, the primary reason for the two day stopover in Moses Lake was to experience the Channeled Scablands, the results of the Ice Age floods.  But rural airports are always a place to check for exotic or unusual airframes and Grant County did not disappoint. 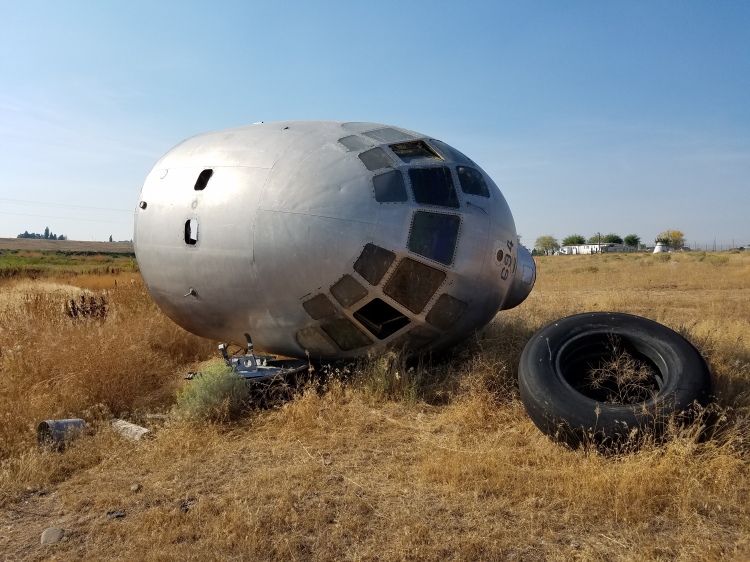 MSN 52-2694, a Boeing KC-97 sits forlornly in an open field on the northern fringes of Grant County.  The #694 is visible on the nose.   The airframe was to be converted to a restaurant.  The last Internet comments about 694 is that she was preserved at Grant County…nope.

N7874, the fourth Boeing 787 built and commonly referred to as test item ZA004.  004 is visible on the nose gear door.  Now with weights instead of engines and sealed up like a long-term storage airframe in a boneyard.  Parked adjacent to Boeing Test Facilities building/hangar on the east side of Grant County.  Apparently, the last flight was from Seattle to Grant County in SEP 2017.

The white aircraft with orange cheatlines is a Douglas B-23 Dragon, Bureau No. 39-0036, now N777LW.  Only 38 were built prior to WW II.  They were used as maritime patrol off the west coast.  This one served as a corporate aircraft for ESSO, Standard Oil, and Westinghouse.